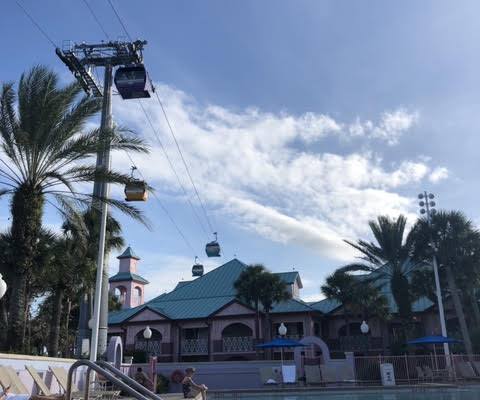 Since I saw construction beginning on Disney’s new gondola system, I have been ecstatic to ride! I booked our annual autumn trip at Caribbean Beach in order to take full advantage of this new transportation option.

The Skyliner has three lines, one going directly from Caribbean Beach to Hollywood Studios (hence my choice, we love Toy Story Land and Galaxy’s Edge!), one from Caribbean to a station in the middle of Art of Animation and Pop Century, and one that goes from Caribbean to Epcot, with a “stop” at Riviera Resort. I call it a “stop” because you can get on or off there if you’d like, but unlike at the other stations, you’re also allowed to stay on and ride as it goes slowly through the terminal.

The gondola cars are beautiful! Some have adorable wraps and others are just colored and unwrapped (the unwrapped ones are easier to see out of). They are designed to fit up to 10 people and have a nice wooden bench on either side and plenty of room in the middle to fit a single stroller, so there’s no need to disturb a little one. A double stroller does need to fold to fit. There are also designated handicapped cars for wheelchairs and ECVs which are stopped separately in the terminal when you load them and then join the line once you’re parked and settled.

The #1 question is of course “are they hot?” We rode on a few 90-degree days and we were not too hot! The ventilation in the cars is amazing; there are little window-like vents that can open (or close if it’s raining), and there are vents below the seats so the way the air circulates is impressive. The other thing to consider is that the longest line (Caribbean to Epcot) takes at most 18 minutes, which isn’t too long to survive without air conditioning, although I promise, the breeze you get on the Skyliner is refreshing.

I had no safety concerns about the Skyliner because I’ve been a skier my whole life and work at a ski resort, but we did ride with some nervous people. By the time we got off, they ended up confessing that they loved it and would definitely ride again!

For us, the convenience and speed was unbeatable. We left our room in Aruba at Caribbean Beach, walked to the Skyliner, rode it, and got into the park and to Slinky Dog Dash in under 25 minutes. I don’t mean the ride took that long, I mean our walk, waiting behind a few people, going through security, scanning our bands to get in, and walking across the park. That could be over an hour with a bus! They were running the buses as well as the Skyliner, so you do have a choice, and the buses run earlier and later. Having this additional transportation option from the four resorts the Skyliner connects is such an added value, and definitely makes a stay at one of them even more attractive.

One concern we had that we decided to test was how crowded it would get leaving right after fireworks. We left right from watching Epcot Forever in France to get on the Skylinerback to Caribbean Beach. The line was the longest we’d seen it but still took fewer than five minutes to get on. The line got much longer behind us but I’d guess no one waited longer than 15 minutes. The lines move fast because the Skyliner is constantly moving and they can load up to 10 people at a time. We left Hollywood Studios right after Fantasmic and there was no line at all!

I know not everyone is as comfortable as me, so I have advice if you’re really weary: the shortest (in height and distance) line is from Pop Century/Art of Animation to Caribbean Beach, so this would be the best one for you to try! I think if you give it a shot, you’ll love it.

Are you ready to give it a try? Do you have any questions I didn’t cover? Let me know and I’ll answer them! Contact Meghan here!